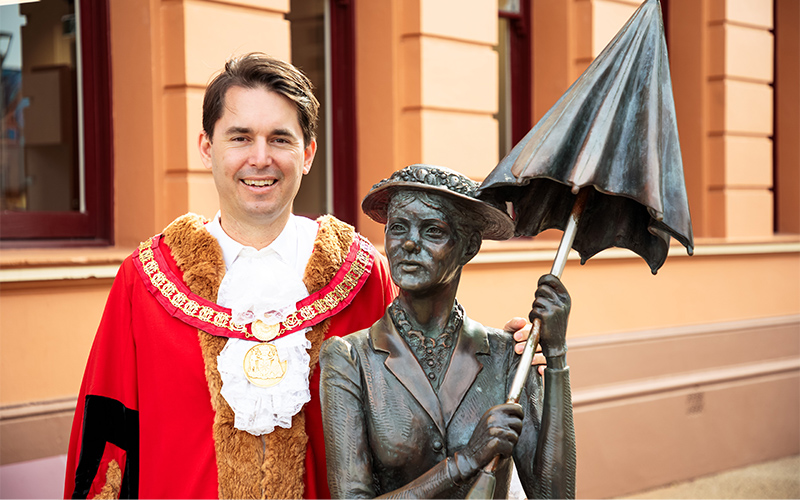 Beloved children’s author P.L. Travers wrote the Mary Poppins series of books from 1934 to 1988. They went on to become wildly popular and inspired multiple adaptations including the 1964 film starring Julie Andrews and the Mary Poppins musical which delighted live audiences at West End and on Broadway. Here in Maryborough, we have the honour of claiming her as one of our own. Helen Lyndon Groff, as she was once known, was born in the residence above the Australian Joint Stock Building which now houses an interactive museum dedicated to her memory.

While Poppins fans can visit the museum at any time of year, every July since 2008 the beautiful historic buildings of Maryborough have served as the perfect backdrop for the Mary Poppins Festival. The event spans four days filled with music, storytelling, parades and more with activities for the whole family. Visitors from all over the world and Australia-wide come to Maryborough each year to take part in the following events:

Participants in this event dress as literary or historical characters and tell a story of their choosing. The winner is decided by the Proud Mary’s, a delightful group of women named ‘Mary’ who have been keen participants in the preservation of PL Travers’ legacy.

For this race, nannies push their prams to the finishing line at top speed. The first one to finish line with their ‘baby’ still inside the pram gets declared the winner.

The point of this contest is to sweep a balloon up a chimney, click your heels and race back to the starting line (whoever gets the fastest time wins).

This event is the pinnacle of the festival for many. Costumed nannies, chimney sweeps and other characters parade through Portside Precinct past the historical buildings that are sure to remind you of the book. Even if you don’t dress up and join in, the pictures you take will last a lifetime.

The 2021 Mary Poppins Festival was postponed to August and some aspects of the celebrations were modified as needed to maintain public safety during the pandemic. Regardless, the show went on as we responsibly paid tribute to one of the jewels in Maryborough’s crown.
To learn more about P.L. Travers from her museum in Maryborough, head to https://storybank.ourfrasercoast.com.au and if you’d like to start planning a trip to the next Mary Poppins Festival, visit https://www.marypoppinsfestival.com.au to see what you can look forward to.